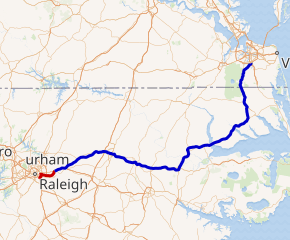 From Wikipedia, the free encyclopedia

Interstate 87 (I-87) is a partially completed Interstate Highway in the U.S. state of North Carolina, currently the shortest designated primary Interstate Highway at 12.9 miles (20.8 km). The completed portion is in eastern Wake County, between Raleigh and Wendell; the majority of the completed route (approximately 10 miles (16 km)) is known as the Knightdale Bypass, while the remaining 3 miles (4.8 km) follows the Raleigh Beltline (Interstate 440). It is planned to continue northeast through Rocky Mount, Williamston and Elizabeth City, ending in Norfolk, Virginia. It is signed as north-south, in keeping with the sign convention for most odd-numbered interstates, but the route goes primarily east-west, with the eastern direction aligning to the north designation. The entire route is concurrent with US 64, with portions also concurrent with I-440 and US 264....

Highway I-87_NC runs South to North with exit numbers starting at the southern most exit of each state or province.